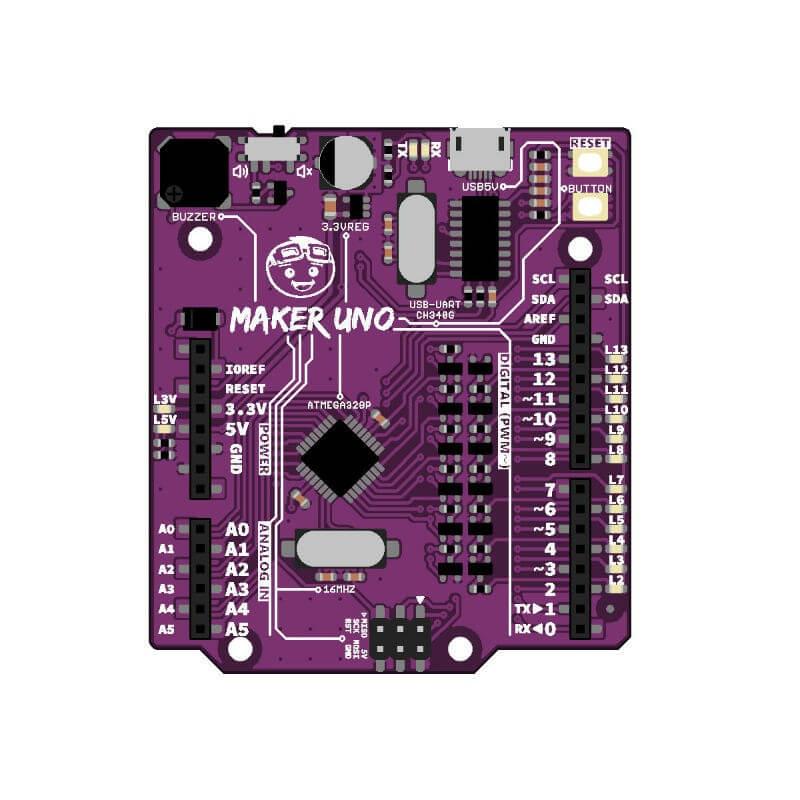 The Maker UNO is an Arduino Compatible board specially designed to simplify building your projects with the built-in LEDs, which make troubleshooting very easy. There is also a simple buzzer included to play some sounds from the Arduino.

Students/Makers can skip the hassle of constructing the basic electronic circuits which can be boring and time consuming. Although it is equally important to learn about basic electronics, it can always come later after they have experienced how easy it is to create awesome project. Start with fun and excitement to get them hooked. Start coding right away and see your board lights up and plays melody with the press of a button.

For experienced makers, this is also useful to quickly test your code without having to connect any other devices. With the conventional Arduino boards, makers also face another common problem - difficulty in troubleshooting their circuit. This is because when it doesn't work, we do not know whether the problem is due to wire connection or coding. With Maker UNO, the problem is solved! Not only do the onboard LEDs work as outputs, they can also act as indicators, clearly showing what's happening on that pin. When the pin is used as input, you can clearly see whether the signal is received by just looking at changes on the LEDs.

Maker UNO is fully compatible with Arduino. You can share the same library and code. We put in 12x LEDs, 1x piezo buzzer and 1x programmable button on the Maker UNO. We have removed the DC jack power input socket as most of the boards used in classes are powered using USB. We have also replaced the ATmega16u2 with CH340 to bring down the cost.

Additional Features
1) One of the brilliant features of the official Arduino Uno is the label printed on its pin headers. It saves us a lot of time when we want to connect the I/O pins to the external circuit. So, we include a set of these label stickers for pin headers for all Maker UNOs! (Please note that you need to peel off the stickers and stick them on your Maker UNO by yourself)

2) Don't throw your box away! There is a small opening on the box for you to plug the USB cable so that you can keep your Maker UNO safely in the original box, no additional casing required.