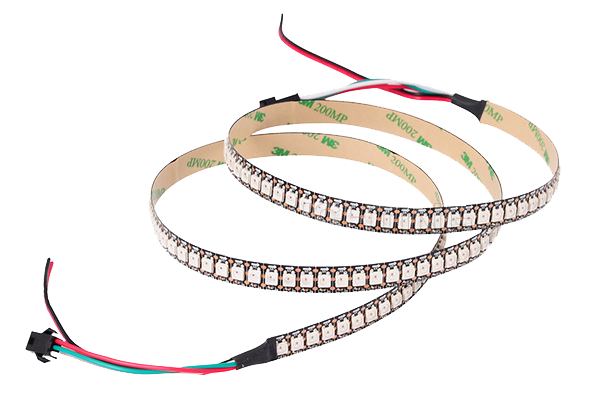 This digital RGB LED strip with 144 WS2813 LEDs per meter makes it possible to control each LED individually on the self-adhesive strip of only 12 mm wide. The strip is easy to control with an Arduino Uno, Mega or a Teensy. A non-real-time operating system such as the Raspberry Pi or other similar systems cannot control this strip itself due to the required timings.The WS2813 chip is the successor of the well-known WS2812 RGB LED. In addition, the LED contains two signal lines so that a broken chip has no influence on the rest of the strip. Unfortunately, when 2 LEDs are defective in succession, this does have an effect. In addition, the WS2813 has an integrated capacitor and resistor so that they are no longer required.The strip is sold per meter (the maximum length of 1 piece is 1 meter).

BasHow is this strip powered and over how many volts and what amperage?
A Opencircuit1 meter of this LED strip can require a maximum of 7 amps / 5V when all LEDs are activated to the maximum. To be on the safe side, it is best to connect this strip to a 10A 5V (50W) power supply. 
Q

Bas van DijkCan they also be linked so that one strip of 2 mtr is created?
A OpencircuitThat's no problem, the LED strips are easy to connect to each other by means of a connector or solder connection. 
Q

Ritchie_VCan this strip be cut (to individual and / or LED clusters)? Possible cutting distance eg 1/144 meter = approx. Every 7mm?
A OpencircuitThis LED strip can be cut per LED, each LED works completely independently thanks to the built-in chips. 1
Q