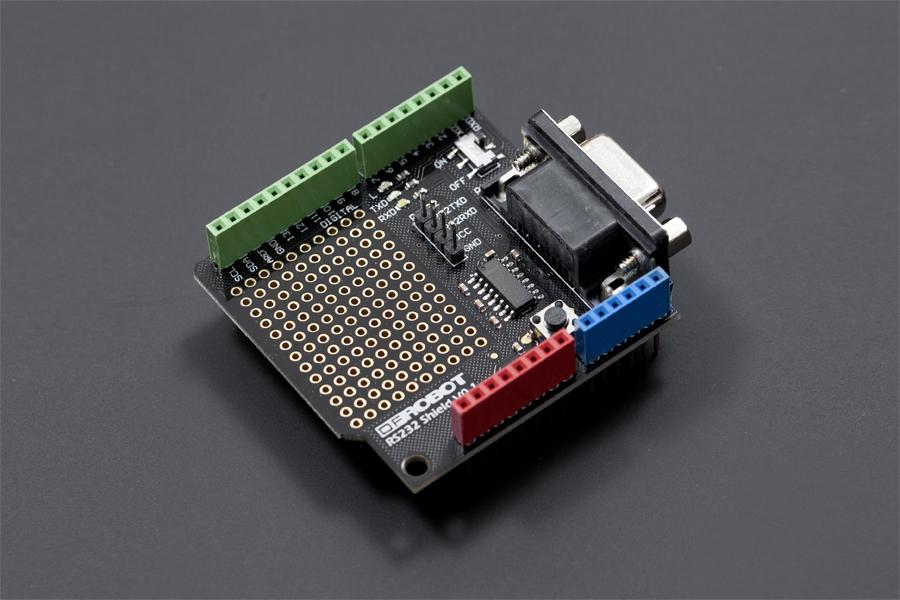 This RS232 Shield For Arduino is designed for the Arduino controller, and it can easily convert UART to RS232 interface.The RS232 shield integrates DB9 connectors (female) that provide connection to various devices with RS232 interface. Also the RS232 shield headers will facilitate your connections and commissioning. It provides the welding areas to make full use of extra space on it, which is highly convenient for prototyping. It provides a run / program mode switch. When switched OFF, you'll be able to programme the Arduino controller; When switched ON, you can use the shield normally. Gold immersion PCB. Long pins on the back that are compatible with most Arduino controllers such as arduino Uno, arduino Mega, Leonardo.As an alternative of RS232, RS485 provides more reliable way to transfer data at a longer distance. We also have a RS485 shield (Arduino) for this scenario.

The maximum cable length for RS-232 is 50ft, but in practise depends on baud rate, cable specific capacitance and ambient noise. The table below contains some rules-of-thumb from experiments done by Texas Instruments years ago.

What is RS232? "In telecommunications, RS-232 is a standard for serial communication transmission of data. It formally defines the signals connecting between a DTE (data terminal equipment) such as a computer terminal, and a DCE (data circuit-terminating equipment or data communication equipment), such as a modem. The RS-232 standard is commonly used in computer serial ports. The standard defines the electrical characteristics and timing of signals, the meaning of signals, and the physical size and pinout of connectors. The current version of the standard is TIA-232-F Interface Between Data Terminal Equipment and Data Circuit-Terminating Equipment Employing Serial Binary Data Interchange, issued in 1997." From Wikipedia.