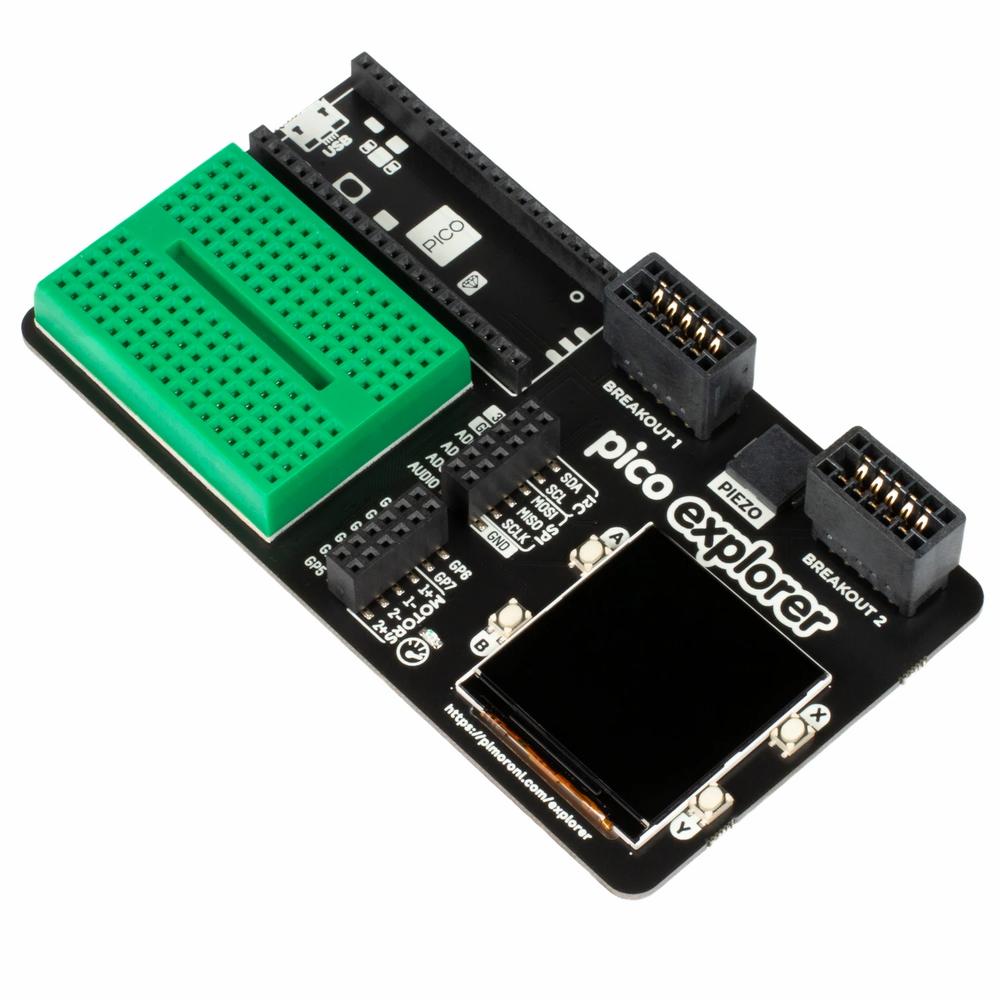 Transform your Raspberry Pi Pico into a electronic adventure playground packed with physical computing goodies including an LCD screen, motor drivers, a mini breadboard, and much more! Pico Explorer lets you play with circuits, build science experiments, prototype tiny robots and inventions and, most importantly, Figure Out How It All Works. Pico Explorer Base - PIM550.We've incorporated tinkering essentials like a mini breadboard, motor drivers, ADC inputs, a built in speaker, general purpose inputs/outputs, switches, and two Breakout Garden slots* so you can add on a couple of our wide range of Pimoroni breakouts. We've also managed to fit in a vibrant 240x240 IPS LCD screen with four tactile buttons so you can easily monitor and control what your project is doing. It's all wrapped up in a nice, sturdy baseboard with a pleasingly compact footprint which won't involve nearly as many trailing wires as if you were experimenting with a traditional breadboard setup. Boo wires, yay Pico Explorer!

Our comprehensive MicroPython and C++ libraries will let you control every aspect of the board like a digital maestro. It's great for beginners, advanced users, and people who awkwardly sit somewhere in the middle and cannot be placed into a simple demographic bucket - we know who you are. We've really crammed all the functionality we could into this board - quite a few of us were lucky enough to have all-in-one electronic circuit kits when we were small and so we jumped at the chance to put together a bang up-to-date version.

A Raspberry Pi Pico and breadboardable components like LEDs, jumper wires and extra buttons are not included.

*Please note that Pico breakout compatibility is a work in progress - scroll down for a list of compatible breakouts!

The landing area on Pico Explorer Base will show you which way round to plug in your Pico - just match up the USB port with the markings on the board. The easiest way to get started is by downloading and copying our custom MicroPython uf2 to your Pico, it includes all the libraries you'll need to use our add-ons. The beginner friendly tutorial linked below will show you how to get to grips with pirate-brand MicroPython.

Version 1.18.2 of our MicroPython build (released 25/02/22) includes fixes for a long running memory related display bug - if you're running an older version be sure to grab the newest release for best results.

We're in the process of writing C++ / MicroPython drivers for as many of our breakouts as possible. If you download the most recent version of our custom MicroPython uf2, it will have all these drivers included.

If your breakout's not yet on the list, you might find Pico-compatible drivers for it in CircuitPython!

Raspberry Pi Pico is a flexible, low cost microcontroller development board from the folks at Raspberry Pi, based on their very own chip - the RP2040. It's easily programmable over USB with C/C++ or MicroPython, and ideal for using in all sorts of physical computing projects, devices and inventions - we're so excited to see what you make with it!

We've called our Pico-sized add-ons packs, as they're designed to attach to the back of your Pico as if it were wearing a very stylish backpack (or a miniature jet pack, if you prefer). We've also got Pico bases (larger add-on boards with a space to mount your Pico on top) and some other boards that let you do interesting hackerly things like using multiple packs at once.