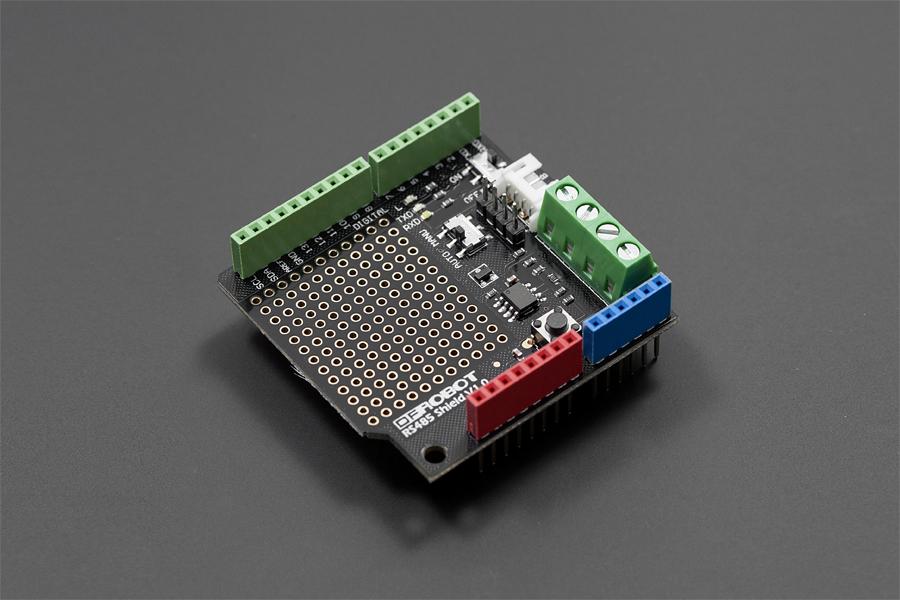 Arduino RS485 is an industrial standard for long distance, anti-interference and reliable communication. So we create this RS485 Arduino shield, especially designed for the Arduino controller board. It converts UART/Serial protocol to RS485 protocol. This RS485 board allows Arduino access to industrial standard protocol easily.

In contrast to RS-422, which has a single driver circuit which cannot be switched off, RS-485 drivers use three-state logic allowing individual transmitters to be deactivated. This allows RS-485 to implement linear bus topologies using only two wires. The equipment located along a set of RS-485 wires are interchangeably called nodes, stations or devices.

"RS-485 enables the configuration of inexpensive local networks and multidrop communications links. It offers data transmission speeds of 35 Mbit/s for distances up to 10 m and 100 kbit/s up to 1200 m. Since it uses a differential balanced line over twisted pair (like RS-422), it can span relatively large distances up to 1,200 m (4,000 ft). A rule of thumb is that the speed in bit/s multiplied by the length in meters should not exceed 108. Thus a 50 meter cable should not signal faster than 2 Mbit/s." From Wiki.