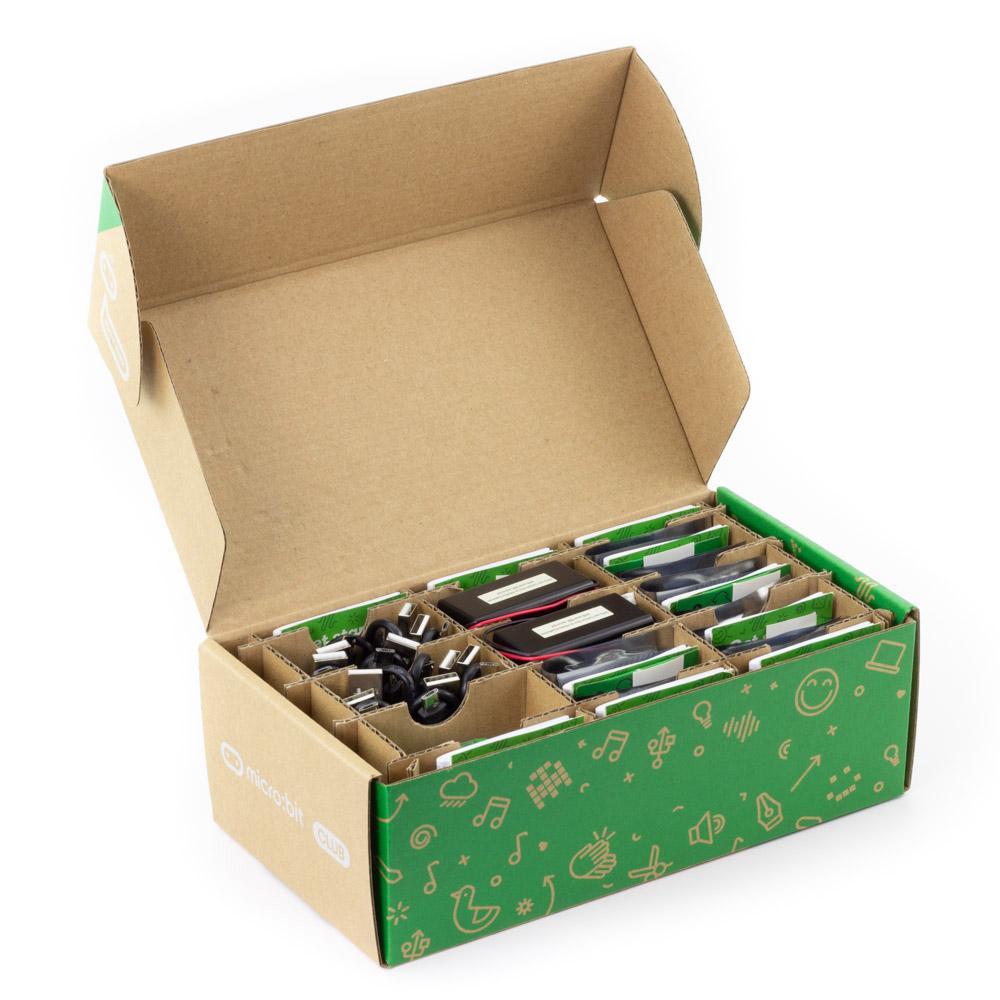 This Club pack is a pack of 10 BBC microbits with 10 x 30cm USB cables, 20 x batteries, and 10 x battery holders. This is the perfect buying option if you are planning to run workshop/club/classroom based activities.

The new micro:bit V2 is the latest revision of everyone’s favourite powerful palm-sized, and fully programmable computer. Conceived by the BBC to encourage children to get actively involved in writing software and building new things that will be controlled by it. V2 is the same size, shape, and it works in the same way as the original micro:bit. So, if you have used the original then this will be instantly familiar to you. Write your code using one of the easy to use editors provided on the micro:bit website, connect your BBC microbit to your computer via USB, press the download button in the editor, and then download the file to the micro:bit.

For an in-depth look at the feature and technical specification differences between micro:bit V1 and the new microbit, click here.

Packed full of on-board sensors: micro:bit V2 is in tune with its surroundings, thanks to an impressive array of onboard sensors. The micro:bit can detect movement in 3 directions, which allows you to tackle projects such as movement triggered alarms, turning the microbit into a tilt-type controller, and more. It has a built-in compass so the microbit will always know in which direction it is facing. It can also detect changes in temperature and light level, which can either be displayed on the LED matrix or used to trigger other events in your project, such as turning on a light or fan. The new microphone can be used to monitor the ambient sound which can be used to trigger other events or be displayed on the LED matrix.

User assignable Buttons: The micro:bit features two front-mounted user-programmable buttons that you can use in any number of ways within your projects. Switch things on and off, use them to move or fire within games, the possibilities are endless. V2 of the microbit also see's the addition of a front-mounted touch logo, which is part sensor and part button and increases your options over just the two user-assignable buttons.

Light and sound: The micro:bit V1 & V2 both feature an LED matrix display. Arranged in a 5 x 5 grid, this handy square display is fully programmable and can be used to display text, numbers, or images. Create badges, status displays or information from the on-board sensors. The new microbit speaker works the same as when you connect a speaker to the micro:bit V1. Only now, sound output will be on both the speaker and the edge connector, instead of just the edge connector as in V1. It also features an onboard microphone which can be used for code that reacts to sound.

Wireless communication: The micro:bit features two different forms of wireless communication, Bluetooth and Radio. In microbit V2, the Bluetooth component has seen an upgrade from Bluetooth 4.0 to 5.0. Bluetooth is great in that it can allow your micro:bit to communicate with other Bluetooth devices, such as phones, tablets, and even PCs via Apps that have been made for this purpose. You can collect sensor data, interact with software/games, make seasonal decorations that can be controlled with your phone, and a lot more besides. The Radio module is a little different, this allows you to communicate with other nearby micro:bits via radio waves. Again, you can transfer sensor data from one micro:bit to other micro:bit(s) or use it to create multiplayer games. You can create a micro:bit network where information gathered by one micro:bit can be used to trigger different events in each micro:bit that is wirelessly connected to.

Edge connector: The edge connector allows the micro:bit to be plugged directly into micro:bit accessories that feature a suitable connector. This opens the door to controlling all sorts of devices and components without also requiring a soldered connection. The micro:bit V2 features 25 pins; 4 dedicated GPIO, PWM, i2c, SPI, and power. Also, there are 3 ring pins for connecting crocodile clips/banana plugs. Notched in V2 for easier connection via; crocodile clips and conductive thread. i2C is now a dedicated bus as opposed to a shared bus, as it was in V1.

Power: You can power the micro:bit in three different ways; The USB connector, the JST battery connector, and the 3V pad on the edge connector. In V2, we see the addition of an on/off switch and a power indicator LED. This is great news as it means you don't have to keep disconnecting and reconnecting the power supply. Just turn off the microbit and (hold the button for 5 seconds) and your batteries are safe. Updates in V2 also see an increase in the amount of power available for accessories, its jumped from 90mA to 200mA which means you can avoid powering some accessories separately (check the manufacturer's datasheet for device power requirements).

Coding For micro:bit V2: You can use MakeCode for blocks, javascript, and python as you always have, to use all of the features that are common to both versions of the BBC micro:bit: Display, buttons, motion sensing, gestures like shake, light sensing, and even the Music blocks. Every programme that could run on a micro:bit version 1 can be re-built to run on V2. The editors will support both versions simultaneously for features common to both boards. To convert an old HEX file into a universal HEX file, drag it into the editor and then export it back to your computer where it can be dragged and dropped onto the micro:bit. If you attempt to use an old Hex file on a micro:bit V2 without updating it, the micro:bit will display a compatibility error.