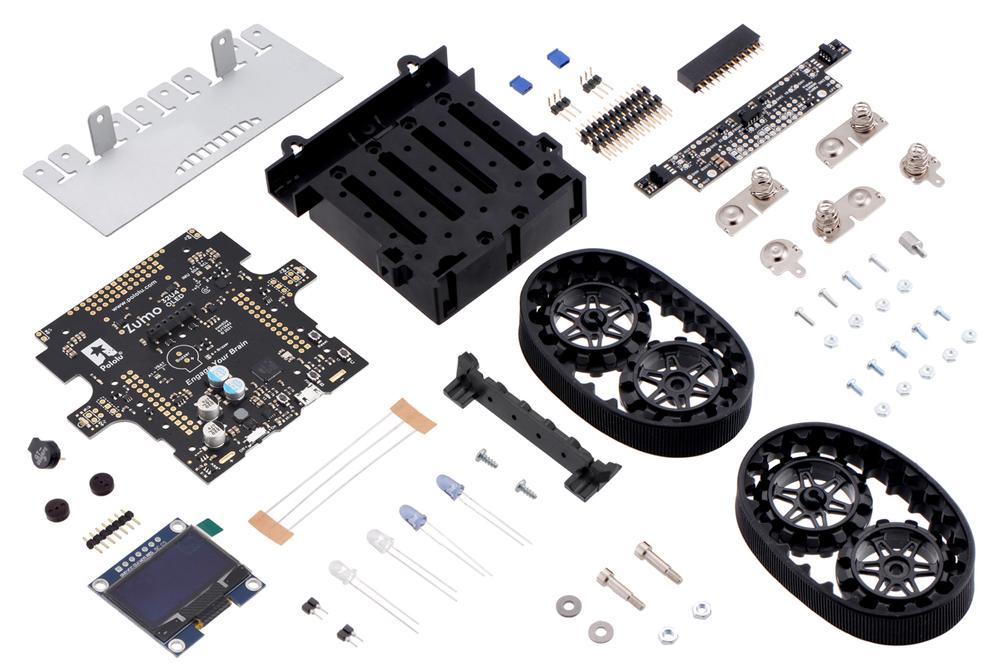 The Pololu Zumo 32U4 OLED robot is a versatile tracked robot based on the Arduino-compatible ATmega32U4 MCU, and this kit contains most of the parts you need to build one—all you need to add are a pair of micro metal gearmotors and four AA batteries. It includes integrated dual motor drivers, a graphical OLED display, quadrature encoders, line sensors, side and front proximity sensors, and a full IMU. The assembled robot is less than 10 cm × 10 cm—small enough to qualify for Mini Sumo. This product is a kit; assembly (including soldering) is required.

This version of the Zumo 32U4 OLED robot (item #4990) is a kit; assembly (including soldering) is required. Motors and batteries are sold separately. A USB A to Micro-B cable (not included) is required for programming.

With the exception of motors, batteries, and a USB A to Micro-B cable, this kit contains everything necessary to build and operate a Zumo 32U4 robot:

This is a newer Zumo 32U4 OLED Robot Kit with a graphical OLED display. For its original version counterpart with an LCD, see the Zumo 32U4 Robot Kit.

The Zumo chassis uses two micro metal gearmotors, one for each tread. The ideal motors for your robot depend on your desired torque, speed, and current draw, so motors are not included with the kit version of the chassis (motors are included with the assembled versions of the Zumo 32U4 robot). We generally recommend using high-power (HP or HPCB, which have long-life carbon brushes) versions of our micro metal gearmotors since the tracks require a decent amount of torque to move effectively; higher gear ratios of the non-HP motors might work if you want lower current draw, but they will be slower and offer less control. Specifically, we primarily recommend the 50:1, 75:1, or 100:1 HP (or HPCB) motors for use with this chassis, and these are the versions we include in our assembled Zumo 32U4 robot. Additionally, be sure to get a version with extended motor shafts if you want to be able to use the Zumo 32U4’s encoders.

Comparison with the Zumo robot kit for Arduino (with Zumo Shield)

Our older Zumo robot for Arduino, built with a Zumo Shield, is another Arduino-compatible robotic platform based on the Zumo chassis. The Zumo Shield mounts to the Zumo chassis and features motor drivers and various sensors, but it does not have an integrated microcontroller; rather, it is designed to interface with boards that have a standard Arduino form factor, like an Arduino Uno, Arduino Leonardo, or A-Star 32U4 Prime, and these boards serve as the main controller for the robot.